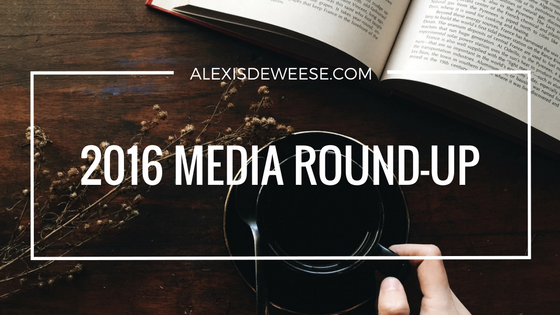 Since my posts have been a little more heavy in nature, I thought it was time for a little fun!

I get pretty reflective at the end of any given year and start thinking through what I enjoyed about that year. Part of that is being a nerd and thinking about the books, music, and movies that made that year.

Ask me about a book I read at any point in time and I can probably tell you where I was and what was happening in my life when I read it. I will listen to a given album on repeat when I love it and it becomes the unintentional soundtrack of that season.

Below is a list of the books, music, movies, and TV shows that defined 2016 for me. Let me know what media formed your year!

This was the book I took to Iceland with me. I was looking for something out of the box that could sustain a distracted airport reader and this totally did the trick.
Think Ocean’s Eleven in medieval space Venice. (Not kidding.)
Lynch’s “fantasy” novel takes place on a fictional planet, but everyone is human and there aren’t a ton of fantasy elements, so this fantasy skeptic was easily onboard. Locke Lamora and his band of thieves are vibrant characters living in a world that feels so real. There is a lot of emotion and intrigue and writing that blows me away. I never knew where the characters would end up or what they would do next which was a rare and exciting thing.

This is the cutest book EVER. Seriously. Drop everything and spend the day reading this book.
Think Sherlock Holmes. Then think about Holmes and Watson as two women—Herringford and Watts. Then think about them set in Canada and 1910. For. Real.
Herringford and Watts are two “bachelor girls” in turn-of-the-century Toronto solving crimes and having splendidly imagined adventures. This book is a stand-out in its genre and the writing is so well done.
If you love historical fiction or mystery, I highly recommend this novel.

Picked up this book at Baker because the word “restless” felt really accurate for my life.
How needed this book was this past year. Allen’s words encouraged me to address my fear of surrender and to look deeply at the desires God has placed in my life.
This book is part spiritual direction, part bible study, part journal, all parts awesome. I would love to revisit this book with a group of women just to see what God does through the prompts and big questions posed in this book.
If you’re looking for a study for the new year, consider this one. 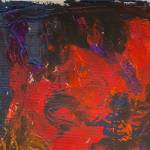 Penny & Sparrow is hands-down my favorite band right now. Their release this year, Let a Lover Drown You is a great exploration of love in all its many forms and is worth the listen, but the album that was really formative this year was Struggle Pretty.
This album became the voice of my worship for a good chunk of this year. Lyricist Andy Baxter and Composer Kyle Jahnke have put together snapshots of the struggle of a faithful walk.
So often when I found myself without words, these songs where the prayers I had left.
…Not to mention that I saw them four times in concert this year and each time was such a great experience. If you’re a fan and haven’t seen them live yet, make it happen!

Yeah. Pretty much.
I was looking for good music to code to this summer and had been hearing a lot about Hamilton from, well, everywhere, and thought I’d give it a try.
Oh. My. Goodness. The music, the writing, the storytelling. It’s history, and hip-hop, and broadway, and every-bit deserving of that Pulitzer, and…Hamilton is all the things, okay?
If I can one day write half as well as Lin Manuel Miranda, I will have not thrown away my shot.
…Sorry. It had to be done.

The Secret Life of Walter Mitty

In February, I had my wisdom teeth out and picked up this favorite to watch as I vegged. In what may have been a drug-induced epiphany, I texted a friend and fellow lover of travel and told her we should go to Iceland. Like, I had paused the movie and priced out flight and lodging and rental car right then and there.
And for whatever reason, she said yes.
Seven months later, we find ourselves traversing fjords, scaling glaciers, and stalking sheep through the single most beautiful place I had ever been.
All because of Walter Mitty.
Great movie about stepping into life’s unknowns and embracing it. It’s a poignant story and is filmed almost entirely in Iceland. Like, I can recognize the majority of the locations in this movie…which is weird but amazing.

I watched this latest HBO series* in two days, it was that good.
In the future, this wild west amusement park allows guests to have a fully immersive fantasy experience. This curated world is populated by “hosts,” which are artificially intelligent robots…that are gaining cognizance.
And if that sounds weird, you don’t even know the half of it.
This show has an incredible cast (seriously, Anthony Hopkins, Thandie Newton, Evan Rachel Wood) and splendid scope. It’s dark and thought provoking.
Watching, I was able to wrestle with some great questions about what it means to be created and be a creator. Great storytelling with a dark edge you can’t ignore.
*Please note that, yes, there is some random HBO crap throughout the series. Why is everyone always naked?

Please note that this is NOT the Netflix reboot. This is just the series.
I started rewatching to prepare for the reboot and caught so much more the second time around. It was also really nice to find common ground with so many women excited for the new episodes. Seriously, don’t know what to talk about with someone? Ask if they’ve watched Gilmore Girls. You’ll talk for the next six hours.
But really, those last four words?