I’m thrilled to bring you a little treat today. My friend (and one of my favorite book-recommenders!) Katrina DeMan has agreed to review A Light So Lovely for us today.

The afternoon after Aretha Franklin died, I was sitting on my couch listening to NPR when a bio-tribute to the Queen of Rock came on. As I listened to smooth tones tell me Franklin’s beginnings, of difficult realities amidst an on-going contribution to her craft, I had a lump in my throat. I wondered if I was going to have to subtly half-wipe tears from my eyes, hiding my emotion from the family inhabiting the room with me. While I have certainly listened to Aretha Franklin’s music, I wasn’t a dedicated fan. I can’t reach back into a personal connection with her canon and draw much beyond R-E-S-P-E-C-T but the bio-tribute brought a narrative connection to me that yielded emotion, curiosity, and yes, respect. It also brought awareness. Is there any one person in the world who isn’t complex, who doesn’t have to fight through obstacles—internal and external—to live in a kind of success?

And as I sat in the tribute of words for Aretha Franklin, I realized that I had been living with a lump in my throat from another bio-tribute about another queen who’s official last name is also Franklin: Madeleine L’Engle. 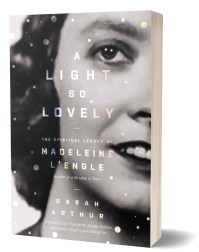 I had been reading Sarah Arthur’s memoir of L’Engle’s spiritual legacy, A Light So Lovely, a nicely woven collection of biography, Arthur’s own memoir and commentary, and interviews with creative culture makers across a span of generations. In this collection of quotes, remembrance, interview, and history are friends, readers, and students who were opened to a new “language of wonder, hope, and joy” because of L’Engle’s uncompromising work in displaying for us all a God who can rather than a God who can’t.

In Arthur’s bio-tribute, we are given a fresh definition of Icon, not as “a person who one worships but a person who instead acts as a window, a person whose life and faith points beyond itself to Christ”. And from this definition, the story in A Light So Lovely finds it’s center as Arthurs works through L’Engle’s life in chapters titled by contrasts—Icon and Iconoclast, Sacred and Secular, Truth and Story, Faith and Science, Religion and Art, Fact and Fiction, Light in Darkness. This is fitting because L’Engle herself had contrasts and Arthur doesn’t hide L’Engle’s paradoxical foibles and inconsistencies. In this, Arthur is gracious and wise and demonstrates that Icons, even in their human deficiencies, can point us beyond themselves to the Light of Christ.

In every way possible, Sarah Arthur’s book about Madeleine L’Engle’s legacy is a celebration of the sweet communion of words. Her setting is Madeleine L’Engle and the word gifts she brought a particular time and place as she read widely herself, then wrote vigorously to the publishing of A Wrinkle in Time. L’Engle then connected with her readership by speaking and teaching workshops as she continued to publish. Her readers and students and contemporaries became aligned hopefuls in the pursuit of the God Who Can because L’Engle demonstrated through the windows she opened, as Arthur characterizes, that “we must not foreclose on how Christ will choose to work, nor through whom.”

There is a sweet communion that comes when words touch another person. Think about a time when a fitting word is spoken or an unexpected connection of understanding is reached in conversation. In that moment, there is a communion of joined reality. Through captured words whether fiction or non-fiction, this communion reaches across times and connects people from different generations, locations, and lived experiences. In writing A Light So Lovely, Arthur is an Icon herself. Through a window she opens of L’Engle’s life, she offers communion and solace for readers and writers as she points to Christ. A Light So Lovely is a eulogy for L’Engle in which a queenly icon is laid to rest. May she rest in peace as the stature of her words live on and continue to bring communion to the generations of readers beyond her days. May more of us pursue with our words the nature of an Icon and continue to point beyond our paradoxical human selves to Christ. Sarah Arthur is doing this and in a most lovely way.

You can purchase your copy of A Light So Lovely from Baker Book House.

The mother of five, super fabulous children, Katrina De Man is daily fielding pleas from those children to get a new dog after the sudden death of Nacho, the family’s Min Pin this spring. Years ago, she got an English degree which she has used in many ways including homeschooling her highly- achieving kids. She reads with on-going commitment and finds abundant joy in attending book clubs with other committed readers. Katrina is also married to a man who is so hard-working and strong that Teddy Roosevelt seems like a slog comparatively. But then, it doesn’t matter because Teddy wouldn’t have even tried to compare to Katrina’s husband since he himself said, “Comparison is the thief of joy.”

There was an error retrieving images from Instagram. An attempt will be remade in a few minutes.