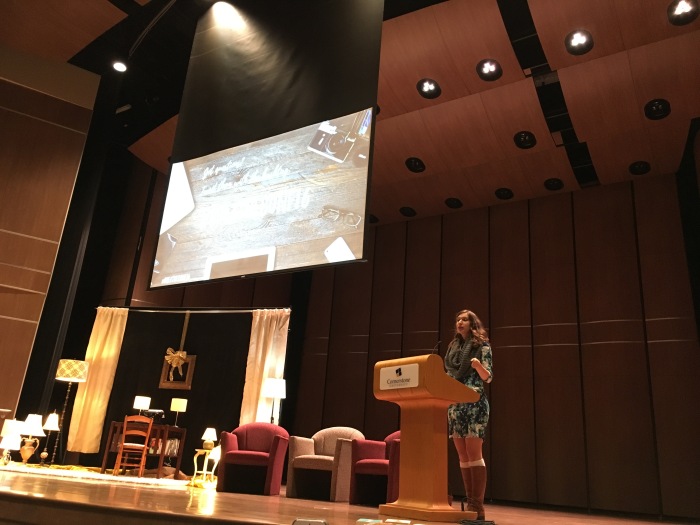 Once upon a time not that long ago in a land not that far away, a sixteen year old girl walked into a writing conference not knowing a soul except for an author friend who would be speaking.
She and her little memo pad settled into a chair near the back of the room for her first breakout session, heart-hammering wondering why on earth she thought it was a good idea to sign up for this thing.
I mean who was going to take this kid seriously, writing manuscripts in her parents basement because she was bored with what the library had to offer. What did she have to offer? Who cared what she had to say?
But that little girl didn’t know that this was exactly where she needed to be. Because there were people there that weren’t going to accept her as a punk-kid, but as a real-life writer. A real-life, blood-sweat-and-tears writer who had things to say and they wanted to read them.

Flashforward seven years later and someone decided it would be a good idea to put that little girl in front of a stage in front of potentially two hundred people and have her talk. And no, she didn’t die (but believe me, the potential was there! I felt it!) and people actually cared what she had to say.

I walk away from this year’s Breathe Conference deeply humbled and deeply grateful. Not only for the small ways God used some of my flippant decisions for his glory, but also for the sweet sweet encouragement from this weekend and the sense that things had come full circle.

If you were to ask me what decision has changed my life the most, I would first say that it was a decision to get on a boat (different story, different time.) But that decision led me to my first Breathe conference and God has used that to open up doors in so many situations in life. It is the reason I chose the school I did, it’s the reason I have the dear dear friends that I do, it is the reason I have had so many great (and not-so-great, but still valuable) professional experiences.

Saturday night, after everyone had cleared out from the conference, I found myself at a table surrounded by all the people who have influenced the woman and writer I have become and I was totally overcome by a deep wave of gratitude for how far God has not only carried Breathe, but has carried me. (And yeah, I ugly cried in front of God and everybody. You totally missed out.)

So what does this have to do with you?

No a lot, but I do have one challenge for you:

If God is poking at you to take a step, take it. Even if it scares the crap out of you. Even if you feel you are unworthy, unqualified, or unequipped. Because guess what? You don’t get to decide that. Your creator does.

God takes our stale bread and smelly fish and makes a meal out of it for people we’ve never even met. He takes my little bit of experience and ability to rant for an hour and uses that to bring maybe a little bit of encouragement. He takes my scared-out-of-its-mind sixteen year old butt and sits it down at a conference in order to connect me to his plan and his people in a way I’ve never experienced before.

All because of timid, doubting yeses.

7 thoughts on “Full-Circle: On Breathe and Gratitude”